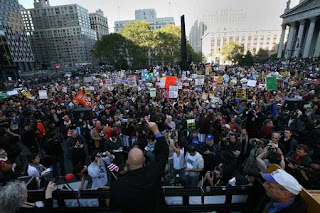 The protesters’ communiqués present a part of protest-activities.
The third communiqué from the 99 percent said on September 20: “Today, we occupied Wall Street from the heart of the Financial District.” The demonstrators began a march through the Wall Street area, rolling through the blocks around the New York Stock Exchange. Two more marches occurred during the day around the Wall Street district, each drawing more supporters to them.
It said: Hundreds occupying One Liberty Plaza, since September 17 afternoon, held a candlelight vigil to honor the fallen victims of Wall Street, and filled the plaza with song, dance, and spontaneous acts of liberation. “We are building the world that we want to see, based on human need and sustainability, not corporate greed.”
The second communiqué said: On September 18, about 400 of the demonstrators woke up in the Financial District amidst heavy police presence. They resumed their General Assembly and made their demands heard. At noon a large group marched chanting “this is what democracy looks like.” During the march many onlookers joined while many more expressed solidarity. By the time they returned to One Liberty Plaza over 100 sympathizers had joined them. As the day progressed their numbers continued to grow, and in the afternoon they were more than a thousand strong. Later, they were “threatened with arrest using a bullhorn; so they spoke together in one voice, louder than any amplifier.”
The first communiqué told: “We are occupying Wall Street.” A group marched on the head of Wall Street and formed a spontaneous blockade, prompting the police to threaten arrest. Speakers included the Reverend Billy Talen of the Church of Stop Shopping, and actress Rosanne Barr spoke on the steps of the American Indian Smithsonian Museum to the crowd. Protesters marched chanting “Wall Street is our street” and “power to the people, not to the banks.” They held a general assembly, based upon a “consensus-driven decision-making process.” All decisions, they claimed, were made “through a consensus process by the group, for the group.” They said: “[F]reedom has been largely taken from the people, and slowly made to trickle down, whenever we get angry. Money, it has been said, has taken over politics. In truth, we say, money has always been part of the capitalist political system. A system based on the existence of have and have nots, where inequality is inherent to the system, will inevitably lead to a situation where the haves find a way to rule, whether by the sword or by the dollar.”
The Wall Street protest reflects indignation of a section of common people, which has cropped up over a long time and in a broader socioeconomic reality. Richard D Wolff, professor emeritus of economics at the University of Massachusetts, Amherst, said in an article in The Guardian that Republicans have denounced President Obama’s “millionaire tax” proposal as “class war”. “[T]he reality is that the class war’s winners [emphasis in the original] have been corporations and the rich. Its losers – the rest of us…”, said Richard Wolff. “[A]s Buffett intimated and New York Mayor Michael Bloomberg more explicitly warned last week, a renewal of class consciousness in the US. Then, Washington might learn what class war really is. (“The Truth about ‘Class War’ in America”, Sept. 20, 2011)
The protest has once again exposed the main stream media’s (MSM) biasness, which ultimately weakens MSM’s effectiveness. Filmmaker Michael Moore said the MSM ignores Wall Street protest. Moore appeared on The Rachel Maddow Show Sept. 19 to discuss the media’s coverage towards the protests from the left. He said: ‘People are down on Wall Street right now holding a sit in and a camp in down there, virtually no news about this protest. This goes on with liberals and the left all the time, and it gets ignored.’” (“Michael Moore: The media ignores Wall Street occupation”, Posted on 09.20.11 by Andrew Jones) The Wall Street protest reveals some political realities in one of the most advanced bourgeois democracies.
Posted by 1 at 5:58 PM No comments: